Congratulations to Troopathon Co-Host Rita Cosby on her recent announcement that she will be hosting a NEW afternoon radio show on WABC New York City.

Three-time Troopathon Co-Host Rita Cosby just announced a new job with 77 WABC Radio in New York City. Rita will be joined by another Troopathon participant, Curtis Sliwa, and the show will be called the ‘Curtis + Cosby’ Show in the important Noon-3pm time slot. We can’t wait to hear her on her new radio show!

“I am thrilled to co-host the brand new ‘CURTIS + COSBY’ show with my longtime friend, radio superstar CURTIS SLIWA,” said Rita in an official announcement by WABC. “With such an unprecedented barrage of endless news topics, now is the perfect time for us to join forces and engage our listeners in a way you will hear nowhere else.”

Rita Cosby joined Troopathon in 2015 as a Co-Host and returned to co-host with Melanie Morgan in 2016 and 2017. She’s been an important part of Troopathon for almost a third of its lifetime and has brought dozens of new and amazing guests into the Troopathon family.

Rita explained her passion for supporting the troops at last year’s Troopathon, telling the story of how her father was a Polish prisoner of war rescued by the Americans in World War 2.

“It’s such an honor to be here today, because we represent freedom. Not just for America, but for the world, and for my father, and for so many countries around the world and I just want to say thank you because for me it’s a real privilege to be here, to share in this, and to honor our troops…God bless all of you.”

In addition to recognition for her strong support for our troops, she has had a distinguished career already as a television news anchor and correspondent, radio host, and bestselling author. As a Special Correspondent for the CBS syndicated program Inside Edition, she specializes in interviewing major news-makers. She already has received three Emmy Awards, the Jack Anderson Award for investigative excellence, the Matrix Award, the Ellis Island Medal of Honor, and the Lech Walesa Freedom Award. 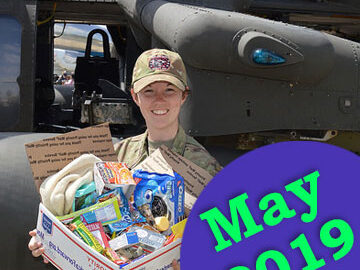