Shortly before 8:00 A.M. on the quiet Sunday morning of December 7, 1941 the Japanese Fleet issued the order —Tora, Tora, Tora – attack!  The peaceful calm was forever shattered by the brutal and unprovoked attack on Pearl Harbor by the Imperial Japanese Naval forces as they sent over 350 fighter planes, bombers and torpedo planes emblazoned with a stark red disc representing the rising sun to rein death down from the skies. The Japanese plan was simple, destroy the Pacific Fleet. Pearl Harbor was caught unprepared and off guard, and in under two hours the Japanese had destroyed or incapacitated the bulk of the US battleships at anchor leaving over 2,400 dead. The USS Arizona was dealt a death blow when a massive 1,800 pound bomb smashed through her decking and exploded her forward ammunition magazine. The ship sank with more than 1,177 men inside. Of the Arizona dead, only 229 were eventually recovered. The remainder of her crew remains entombed forever standing watch.The next casualty was the USS Oklahoma struck by multiple torpedoes causing her to capsize with over 400 sailors aboard losing their lives. Thirty Two sailors were rescued from the hull thanks to the heroic efforts of a crew of workers led by civilian Julio de Castro, a Hawaiian native. The Oklahoma was eventually righted, however, was too damaged to be returned to service.By the time the attack was over, every battleship in Pearl Harbor–USS Arizona, USS Oklahoma, USS California, USS West Virginia, USS Utah, USS Maryland, USS Pennsylvania, USS Tennessee and USS Nevada–had sustained significant damage and in total 188 US aircrafts were destroyed with another 159 damaged out of just over 400 aircrafts in the Pacific Fleet.This devastating attack led to the declaration of war by the United States and incurred the mighty wrath of the U.S. forces. So even though the Pacific Fleet was crippled, the resolve of our great forces prevailed.Seventy five years after that “date that will live in infamy” only a small group of survivors remain, most well into their 90’s.  However, their spirit and resolve lives on strong in the new generation of warriors who protect us from harm and sacrifice so very much so that we may enjoy the great freedoms for which they sacrifice so greatly.Please take a moment to reflect upon the sacrifices our troops past and present have made for us all. Our troops still serve far from home and with Christmas just around the corner, won’t you take a moment out of your day to thank and honor those who still serve with a  remembrance from home this season?

We must never forget. We must give thanks to our fighting Armed Forces. Sponsor a special Christmas themed care package today.

Every care package is personalized with a special note from you, and is full of the items our troops want. Coffee, cookies, and Christmas goodies!!

After Pearl Harbor, and again after 9/11, our troops fought fiercely to destroy enemies who threaten America. The cost of freedom is never cheap, it is paid for by the sacrifice of many brave young men and women who pay the ultimate price for our freedom. We must remain eternally grateful and show our appreciation to those who risk their lives every day. It has been a long and difficult road for our troops in Iraq and Afghanistan; they have fought so hard and sacrificed so much, but in that sacrifice they have won many stunning victories, and accomplished things they were told could not be done. For that we are grateful and blessed to live in a nation protected by such courageous individuals. Please remember those troops today, and offer your support. Each Christmas & Holiday Care Package comes with a Christmas stocking, hot cocoa, peppermint coffee and authentic Christmas candy canes!

Check out the extra special Christmas items in our Holiday Care Packages for the Troops
Below you’ll find some of the special holiday items we’re including with our Christmas care packages for the troops. Our boxes still come with most of the standard care package items but for Christmas we like to send our troops something to remind them of the Christmas spirit.Each box will include a real Christmas stocking that the troops can hang as decoration just like people back home hang them by the chimney. It’s an unmistakable sign that it’s Christmas time! We’re also packing in some Hot Chocolate, the perfect feel-good drink to sit around the fireside with your buddies and tell great stories of Christmas times past.
Candy canes are the iconic Christmas candy and we’re going to send the troops some to of these perfect peppermints of the season. Finally we’ve got the perfect recipe for Christmas coffee, some peppermint coffee beans roasted locally by our jolly old friends at Roger’s Family Coffee Company. Just imagine what it would be like to know someone loves and supports you while you are on patrol, standing guard or just a few months away from coming home. Make your gift today and send the support you know they deserve, with a tax deductible donation. 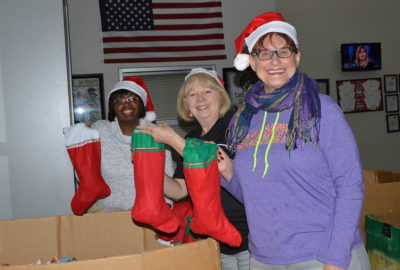